3 Now as he was going along and approaching Damascus, suddenly a light from heaven flashed around him. 4 He fell to the ground and heard a voice saying to him, “Saul, Saul, why do you persecute me?” 5 He asked, “Who are you, Lord?” The reply came, “I am Jesus, whom you are persecuting. 6 But get up and enter the city, and you will be told what you are to do.” 7 The men who were traveling with him stood speechless because they heard the voice but saw no one. 8 Saul got up from the ground, and though his eyes were open, he could see nothing; so they led him by the hand and brought him into Damascus. 9 For three days he was without sight, and neither ate nor drank. (Acts 9:3-9, NRSV) 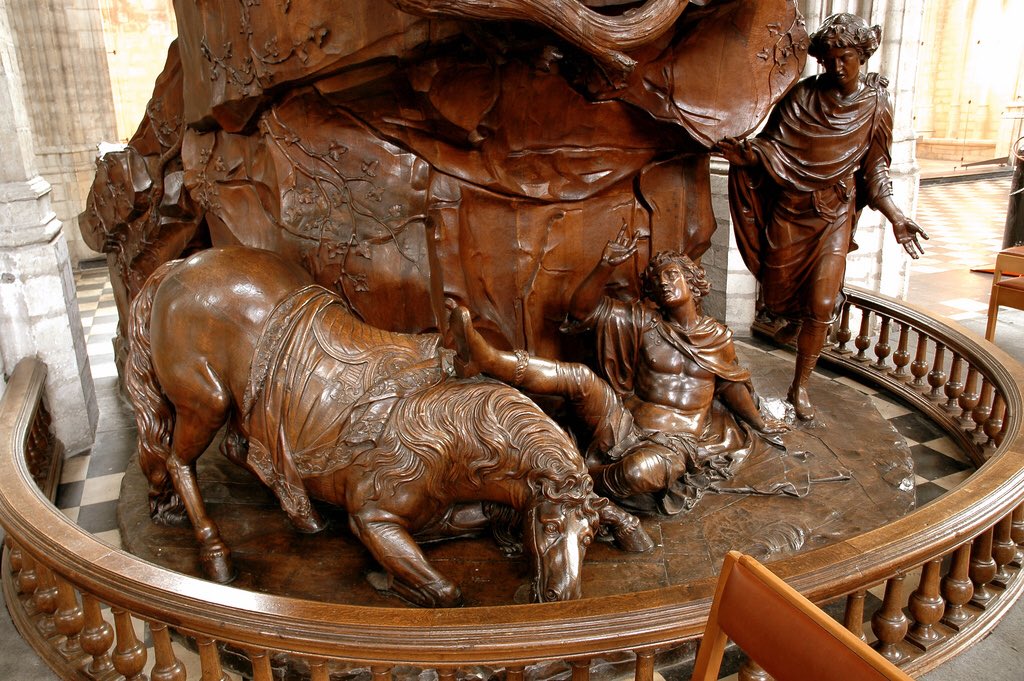 Paul’s experience on the road to Damascus, highly dramatic, has long been of interest in “conversion” studies. The portraits of the earlier and later Paul seem to present themselves as the ideal model of the life reborn in grace. He was around the age of 28-31 at the time, in around AD 33-36. That encounter between Paul and the Risen Christ stood at the origin of Paul’s “conversion” experience and the turning point in his life.

1. Our understanding of St Paul starts with his personal experience.

Before his conversion, Paul, known then as Saul, was an intense member of the Pharisaic group in Judaism. In that way of life, he “persecuted the church of God violently and tried to destroy it” (Galatians 1:13). He also witnessed the stoning of Stephen and approved it (Acts 7:57-8:3).

In view of who he was and what he was doing persecuting the Church, Paul experienced the love of God as an entirely unmerited gift while he was deep in sin.

When conversion visited upon him, it led to a drastic transformation. From a life centered on a pharisaic-religion, he shifted to a completely different vision of faith, centred in Christ. This new faith is one that is liberated from the notion that you can earn your salvation by the merits of performing the works of the Law. Paul hailed from a pharisaic-religion that had developed a system of 613 laws, 365 negative commands and 248 positive laws. That experience of encounter with Christ on the road to Damascus would ultimately change his previous understanding of justification from the works of the Law to justification by faith in Christ.

St Paul’s conversion experience not only brought about a radical change to his own life, but it is one of the most important and sea-changing moments in the history of Christianity. He later became convinced that while still a sinner destined for hell, Christ graced his life.

Self-justification would stand starkly contrary to Paul’s experience; he would henceforth practise a spirituality of modesty and humility. In that revised spirituality, he came to understand that all that we have is God’s gift:

Realising that all the zeal of his dynamic personality was being wasted, his new life of grace became a tireless proclaiming and living out of the message of the cross.

In that new life of grace, we must not miss the fact that Paul experienced grace as, at the same time, a task. He sets it down in Galatians 5:5, where he refers to faith as not a passive attitude but “active in love”. It is a gift that is at the same time a mission. So, the revelation he received was the starting point of his mission to the Gentiles.

In Paul’s Letter to the Romans, sin is personified as a power or force in world history that keeps human freedom in bondage.

Sin worked havoc in Paul’s life, apparently, causing the self to be divided.

The power of sin is a universal force in the world, and it resides in each one of us. All the more, he insisted, would we need grace in our lives. In Romans 5:12-21, Paul, Apostle of Grace, tells the story of his life.

In the Genesis narrative, we have a projected explanation of present human condition. There, Adam the symbolic first human being, through his sinful disobedience of the divine commandment, was seen as negatively affecting, the world in which he lived. That was in turn compounded by a history of humanity’s actual personal sinning. Even then, Paul does not explain this causality by inheritance. Church doctrine on original sin in which all is said to participate by inheritance was read back into this passage of Paul, but scholars today agree it “cannot be found there.” Paul only asserted that all are sinners and that all share in a universal situation from the beginning. But, Paul did not provide a developed doctrine of original sin; the emphasis of the entire passage being on Christ as Saviour.

What Paul wanted to stress was the power of divine grace. In view of his earlier attempts to completely eradicate Christianity, he perceived his conversion as evidence of the power of Divine Grace. His story has drawn adoring remarks for grace:

The accounts of Paul’s conversion experience have commonly described it as a miraculous and divine revelation, with the Risen Christ appearing to Paul. Says Paul in his Epistle to the Galatians:

That said, however, St Paul’s experience of deep conversion cannot be detached from the concrete, real life, witness of Christian individuals and the community of faithful. The love of God, we must insist, is useless, unless you can feel it, touch it, unless it is concrete. Three concrete elements in Paul’s conversion experience may briefly be mentioned.

First, we must never lose sight of the fact that, God used Paul’s experience of the love and generosity of the Christians whom he persecuted, and the great freedom in their lives, to bring him by grace to faith. Second, he went away to Arabia for three years of preparation (Galatians 1:15-18). Third, when later on the Christian community and its leaders were suspicious of Paul and would not accept him, let alone to commission him for serious missionary work, Barnabas rigorously vouched for him. [See our webpost No. 34. “Tarsus and the Spirit of St Paul” dated 16 June 2011.]

Their genuineness made him admit the emptiness of his own life and beg God for enlightenment on the truth about Christ in God’s plan.

It was the community as the Body of Christ who provided the witness that God could use, and still uses today, to reveal the reality of salvation in Christ and the path we should follow to do God’s will.

Nearer home, today, have we not heard stories from priests who say that they became better priests precisely by encountering Christ in the faithful? And take a look at this powerful story of witnessing from a group of early teens junior secondary school girls:

Have we not heard too of repeated complaints by (and about) the RCIA newly baptised who, so soon after their baptism, drifted away from the Church because of: [a] lack of serious Christian witnesses, [b] lack of faith-companion, and [c] lack of community…?

Then, have we not heard  of random stories of Church-exiting by grumbling members allegedly because they are so very “scandalised” and “fed up” with hypocrites – priests and parishioners. Problem is, ultimately all this may be more an excuse than anything else. One may literally go through a list of possible reasons that underpin such exits, one of which is perhaps a common, and fundamental, failure to comprehend what a Mass essentially is. From there, the reality may emerge that there is a wrong focus on scandals rather than thanksgiving and worship, on which the life of Saint Paul may teach us a serious lesson or two.

You are most welcome to respond to this post. Email your comments to jeffangiegoh@gmail.com. You can also be dialogue partners in this Ephphatha Coffee-Corner Ministry by sending us questions for discussion.